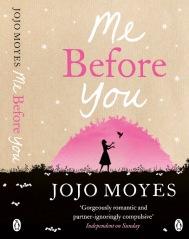 Lou Clark knows lots of things. She knows how many footsteps there are between the bus stop and home. She knows she likes working in The Buttered Bun tea shop and she knows she might not love her boyfriend Patrick. What Lou doesn’t know is she’s about to lose her job or that knowing what’s coming is what keeps her sane. Will Traynor knows his motorcycle accident took away his desire to live. He knows everything feels very small and rather joyless now and he knows exactly how he’s going to put a stop to that. What Will doesn’t know is that Lou is about to burst into his world in a riot of colour. And neither of them knows they’re going to change the other for all time.

So this is not your conventional boy meets girl type romance novel despite the pink fluffy deceptive looking cover. It’s an emotional rollercoaster of a story from start to end.

I’ve read this book as it was chosen by a fellow book club member as read of the month and was an unexpected pick. Initially I thought it was just going to be a run of the mill romance novel but I was very pleasantly surprised. I read the book on holiday in 2 days as I couldn’t put it down and was drawn into the relationship between Will and Lou immediately.

I felt that that the characters were believable, these could have been people that live in your street or you’ve heard your mother talk about and therefore could relate to them.  My biggest change of heart was towards Will’s mother, Camilla. Initially I thought she was a total bitch, but throughout the book I warmed to her and in the end felt sorry for her. Not only had she seen her child go through this terrible accident but was now going to have to watch him die.

Will’s decision is definitely thought provoking on what is a current and controversial subject and approaches Assisted Suicide in what seems a light hearted way. However, this gave us all a lively and interesting debate on Euthanasia so this novel is well suited for a book club choice.

It’s a totally heart warming and heart breaking novel that brought tears to my eyes and I was really hoping for a different outcome right until the end…have the tissues at the ready.

One thought on “Book Review: Me Before You by JoJo Moyes”