I’m delighted to be a part of the Murder on a Summer’s Day cover reveal for Frances Brody. I love that this cover is simple yet elegant!

I recently read my first Kate Shackleton mystery, Dying in the Wool, in preparation for this reveal and I really enjoyed it. The protagonist, Kate Shackleton, is like a younger, Yorkshire version of Miss Marple and I love a good Miss Marple mystery! Make sure you read to the bottom to enter the giveaway for a signed copy.

Without further ado and waffle…..here’s the lovely new cover:

Murder on a Summer’s Day is the fifth novel in the Kate Shackleton Mystery Series set in 1920s Yorkshire.

A Maharajah on the Moors

When the India Office seek help in finding Maharajah Narayan, last seen hunting on the Bolton Abbey estate, they call upon the expertise of renowned amateur detective Kate Shackleton to investigate.

But soon a missing person’s case turns to murder. Shot through the heart, it’s clear to Kate that Narayan’s body has not been in the woods overnight. Who brought it here, and from where? And what has happened to the hugely valuable diamond that was in the Maharajah’s possession?

As Kate digs deeper, she soon discovers that vengeance takes many forms. Was the Maharajah’s sacrilegious act of shooting a white doe to blame? Or are growing rumours of a political motive too powerful for Kate to discount?

One thing Kate is sure of: her own skills and insights. Qualities that she is sure will help her unravel a mysterious murder on that fateful summer’s day . . .

James’s briefing had left me feeling less than well-armed for the task ahead. What was a maharajah of Gattiawan doing in Yorkshire? Why was he visiting Bolton Abbey before the start of the shooting season? Today was Saturday, 2 August, so open season, but with ten days to go before grouse-shooting began, on the Glorious Twelfth.
James had not even told me when the maharajah and his companion arrived in Yorkshire.
I checked my watch. Ten minutes to six.
Mrs Sugden called from the doorway. ‘I’ve found summat about maharajahs.’
‘I’ll be there in a tick.’
Fortunately, Mrs Sugden is a fast reader and The Times Court Circulars have the virtue of brevity. She placed the relevant pages on the piano stool, drawing it up to the chaise longue.
We sat side by side as she tapped the page with her ridged fingernail and read, ‘The Maharajah of Kapurthala is the first Indian Prince to visit the British Empire Exhibition. He expressed his satisfaction with the Punjab Court exhibit. He has now returned to Paris, but will be back.’
‘What about Gattiawan?’
Mrs Sugden is nothing if not thorough. ‘Aga Khan … Maharajah of Rajpipla at the Savoy Hotel … Maharajah of Nawanger … They’ll all know each other. Probably rivals, and one of them has done away with another, perhaps sent an assassin. It’s like Shakespeare. Ah, here he is. The Maharajah of Gattiawan arrived at Marseilles yesterday in the SS Malwa on his way to London.’
I looked at the item, dated 26 April. It gave no indication whether the maharajah was travelling overland, or stopping on the way. ‘Nothing else since then?’
She shook her head. ‘Nowt else in Court Circulars, only an article about the good command of English among educated Indians, from the Special Correspondent in Bombay.’
There was nothing for it but to set off, feeling less than well-prepared.
I shrugged into my motoring coat.
Mrs Sugden followed me along the garden path. ‘You don’t have much luggage. Have you packed an evening dress?’
‘The Delphos robe.’ I opened the car door and got in quickly, before she had time for more questions.
She frowned at my choice of evening wear. ‘I suppose that Delphos gown doesn’t betray its age. But I can pack another bag for you.’
I started the motor. ‘If I need anything else, I’ll send you a telegram.’ My mind already raced ahead. Prince Narayan of Gattiawan, where are you?
Mrs Sugden waved, folding her other arm around herself against the morning chill.
A sudden thought propelled her through the gate. She leaned into the motor. ‘Be careful. They all carry daggers, and they’re very good at strangling.’
‘I’ll try to stay in one piece, throat intact.’
As I drove away I heard her call something about the black hole of Calcutta, but my thoughts were already on the missing man, the lovers’ tiff, and the mysterious Miss Metcalfe who had hooked herself an Indian prince.
James wanted to rule out theft and foul play. The Yorkshire Dales has its sprinkling of poachers. But jewel thieves, murderers? Surely not. 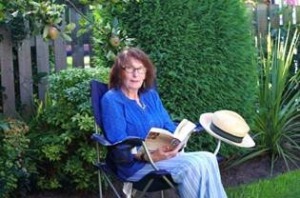