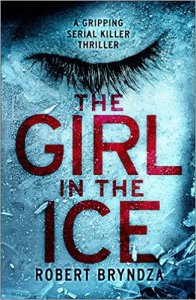 Her eyes are wide open. Her lips parted as if to speak. Her dead body frozen in the ice…She is not the only one.

When a young boy discovers the body of a woman beneath a thick sheet of ice in a South London park, Detective Erika Foster is called in to lead the murder investigation.

The victim, a beautiful young socialite, appeared to have the perfect life. Yet when Erika begins to dig deeper, she starts to connect the dots between the murder and the killings of three prostitutes, all found strangled, hands bound and dumped in water around London.

What dark secrets is the girl in the ice hiding? …

I must confess I requested this book from the publisher via Netgalley as I’d literally seen it everywhere and it’s the book of the moment that’s on every blogger’s radar, so yeah ok, I wanted to see what all the fuss was about.

So let’s cut to the chase, as there’s so many crime detective novels out there, the author has to set themselves apart from all those others with their characters. You’ve got to believe and invest in these characters otherwise it could be just any old easily forgotten crime story. And I’m pleased to say this book doesn’t disappoint!

From the first few opening pages I knew I was going to like ballsy DCI Erika Foster, and I knew this because she requested a phone with real buttons and not a touch screen. I really wanted to continue with my Blackberry and a proper keyboard but…sigh…’tis no longer! Yep…that’s all it took for me to connect with her and root for her all the way; a phone! Through all the old boy’s network crap, the injustice of office politics and police procedure I just wanted her to have a shot. Then of course, we learn her back story, which made me like her even more. She’s not just an icy bitch on the outside, she is hurting and protecting herself.

I really liked the secondary characters in Detective Moss and Isacc the forensic pathologist and look forward to seeing more of them in future novels.

One teeny weeny isty bitsy niggle, the post mortems were referred to as an autopsy; I thought they were post mortems in the UK but obviously I’m not an expert and stand to be corrected. It may be both terms are used here.  Other than that, everything else was totally believeable and lead me to believe throughly researched in terms of terminology or by someone in the know. Well written and not over-the-top or pretentious, just really good gritty drama culminating a dramatic cat and mouse ending!

Fans of a good crime drama and detective novels will like this, I enjoyed it as much as I have done the two Tony Parsons’ Max Wolfe books. If you’ve not heard of this book where have you been?

Connect with the author Robert Bryndza

6 thoughts on “Book Review: The Girl in the Ice by Robert Bryndza”