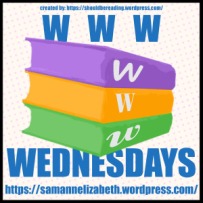 This weekly meme is hosted by Sam at Taking on a World of Words. It’s open to all to participate. Why not join in and let us know what’s on your reading list this week…

The Ice Twins by S.K Tremayne

I’m about half way through this book and I’m finding it compelling reading; it’s really good. It’s one of those books that makes you think how you would cope and react in the same situation. 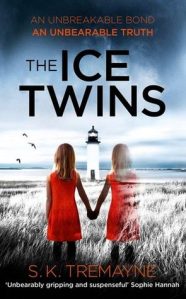 A year after one of their identical twin daughters, Lydia, dies in an accident, Angus and Sarah Moorcraft move to the tiny Scottish island Angus inherited from his grandmother, hoping to put together the pieces of their shattered lives.

But when their surviving daughter, Kirstie, claims they have mistaken her identity – that she, in fact, is Lydia – their world comes crashing down once again.

As winter encroaches, Angus is forced to travel away from the island for work, Sarah is feeling isolated, and Kirstie (or is it Lydia?) is growing more disturbed. When a violent storm leaves Sarah and her daughter stranded, Sarah finds herself tortured by the past – what really happened on that fateful day one of her daughters died?

A Husband’s Confession by Zoë Miller

I didn’t really enjoy this one. It has such promise with a prologue about a young woman involved in a hit and run but unfortunately it was all down hill from there.

When Ali met Max in the summer of 1990, he turned her empty life around and filled it with love. Now, years on, Ali’s greatest fear is that her happiness and contentment might be taken away from her. But just as Max’s star is rising, unsettling incidents at their artisan bakery in Dublin’s creative quarter threaten to damage the reputation of the bakery.

Finn and Jo were running away from heartache when they met in Australia over 20 years ago. But now Finn is in shock after the demise of his gritty role in a popular television crime drama, and Jo fears for him and their marriage. Then an accident on a Saturday night has devastating consequences for both families, tearing their lives apart in ways they never imagined.

I saw this book on Sam’s WWW post a few weeks ago and was very interested to read it so I reserved a copy from my local library. I don’t usually read non-fiction so this is a little out of my comfort zone but one I’m looking forward to nonetheless. 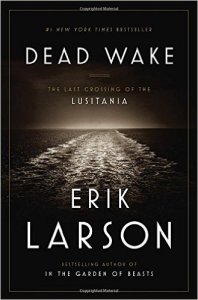 On May 1, 1915, with WWI entering its tenth month, a luxury ocean liner as richly appointed as an English country house sailed out of New York, bound for Liverpool, carrying a record number of children and infants. The passengers were surprisingly at ease, even though Germany had declared the seas around Britain to be a war zone. For months, German U-boats had brought terror to the North Atlantic. But the Lusitania was one of the era’s great transatlantic “Greyhounds”—the fastest liner then in service—and her captain, William Thomas Turner, placed tremendous faith in the gentlemanly strictures of warfare that for a century had kept civilian ships safe from attack.

Germany, however, was determined to change the rules of the game, and Walther Schwieger, the captain of Unterseeboot-20, was happy to oblige. Meanwhile, an ultra-secret British intelligence unit tracked Schwieger’s U-boat, but told no one. As U-20 and the Lusitania made their way toward Liverpool, an array of forces both grand and achingly small—hubris, a chance fog, a closely guarded secret, and more—all converged to produce one of the great disasters of history.

So what do you think of my choices this week?