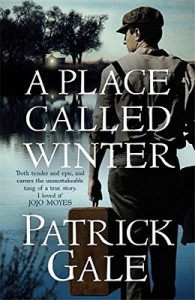 A shy but privileged elder son, Harry Cane has followed convention at every step. Even the beginnings of an illicit, dangerous affair do little to shake the foundations of his muted existence – until the shock of discovery and the threat of arrest force him to abandon his wife and child and sign up for emigration to Canada.

Remote and unforgiving, his allotted homestead in a place called Winter is a world away from the golden suburbs of turn-of-the-century Edwardian England. And yet it is here, isolated in a seemingly harsh landscape, under the threat of war and madness that the fight for survival will reveal in Harry an inner strength and capacity for love beyond anything he has ever known before.

I read this book back in late November but am so behind in my reviews I hope I still can remember what I thought.  I do know it was one of my stand -out books that I read in 2016, so if you’ve not read it and enjoy historical fiction then I’d 100% recommend it.  So on I go….

But first, why are the books that you really loved and truly enjoyed the hardest to write a review for? Is it just me?

I’d not read any of Patrick Gale before but I shall definitely make a point of reading more after reading this for a book club read.  The addition of the discussion questions at the back of the book were particularly useful.

From early on it reminded me of Sarah Waters books; her style, content and her ability to make you believe that everything she’s written is the absolute truth.

The book flips back forward between Harry’s time at Bethel, some kind of early 1900s rehab centre and his experiences leading up to and following his confinement.  Some of these scenes don’t make for easy reading and do come across as very traumatic.

Harry’s character is somewhat frustrating in his nicety all the time, but his strength of character is however applaudable.  Imagine being born and raised for one life but then through a series of actions and decisions that are not entirely your own you end up living a life completely removed from what  you know.

When Harry makes the journey to Canada, the descriptions, the sense of place, its expanse, desolation and the hardships that Harry endures are very vivid and excellently depicted.  It made me feel like I could be there shuddering at the cold!

There are some sexual scenes that some readers may find difficult; one in particular made for uncomfortable reading and I’m not afraid to say it made me feel nauseous.

Sad but inspiring, I will admit I was expecting something very different from this book but actually loved what I got.