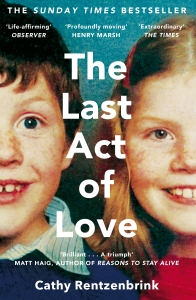 In the summer of 1990, Cathy’s brother Matty was knocked down by a car on the way home from a night out. It was two weeks before his GCSE results, which turned out to be the best in his school. Sitting by his unconscious body in hospital, holding his hand and watching his heartbeat on the monitors, Cathy and her parents willed him to survive. They did not know then that there are many and various fates worse than death.

This is the story of what happened to Cathy and her brother, and the unimaginable decision that she and her parents had to make eight years after the night that changed everything. It’s a story for anyone who has ever watched someone suffer or lost someone they loved or lived through a painful time that left them forever changed.

I attended an event with Cathy Rentzenbrink at Booka Bookshop in Oswestry  when this book was released in 2015.  During the evening it was quite obvious the devastating effect this had had on Cathy and her family; her voice shaky with emotion as she spoke about her motivation for writing this book – in all honesty, after reaching the end, I think it was for cathartic reasons and the benefits of off-loading!

The book is a brutally honest account of living with a family member in a persistent vegetative state and the effects on those that care for them and quite frankly it details experiences that you’ll wish you never have to go through.  From everyday practicalities of feeding and washing to more medical procedures.

It’s a very heartfelt story however, as I was getting towards the end I was beginning to lose patience.  It is a very raw and emotional story but I so wanted her to move on sooner, not dwell and self-destruct.  I guess until you’ve experienced such profound grief it’s hard to relate.

I found the legal aspects of the book really interesting as I can remember, as a law student, discussing the Tony Bland case which involved the hospital and his family petitioning the court to allow the hospital to withdraw life-prolonging treatment.  Such a heart-breaking decision to have to make but one which ultimately would bring, for want of a better word, closure.

Read if you like non-fiction family medical memoirs with legal aspects.

7 thoughts on “Book Review: The Last Act of Love by Cathy Rentzenbrink”