This weekly meme is hosted by Sam at Taking on a World of Words. It’s open to all to participate. Why not join in and let us know what’s on your reading list this week…

Welcome to this week’s WWW Wednesday!

I’m away till Friday, in hopefully sunny Suffolk, so will do some blog hopping upon my return 🙂

Just started reading this one so nothing to report yet.  Have high hopes though as I loved Alex!

Sophie Duguet-young, successful, and happily married–thought at first she was becoming absentminded when she started misplacing her mail and forgetting where she’d parked her car the night before. But then, as her husband and colleagues pointed out with increasing frustration, she began forgetting things she’d said and done, too. And when she was detained by the police for shoplifting, a crime she didn’t remember committing, the confusion and blackouts that had begun to plague her took on a more sinister cast. Her marriage started to come apart at the seams.

Now Sophie is in much deeper water: the young boy she nannies is dead while in her care, a tragedy of which she has no memory. Afraid for her sanity and of what the police will do to her when the body is discovered, Sophie goes on the run, changing her identity and appearance to evade the law. Forced to lead a very different kind of life, one on the margins of society, Sophie wonders where everything went wrong.

Still, with a new name and a new life, she hopes that she’ll be able to put her demons to rest for good. It soon becomes clear, however, that the real nightmare has only just begun . . .

I recently finished Dear Mrs Bird by A J Pearce

This is a really heartfelt read which reminded me of 89 Charing Cross Road and The Guernsey Literary and Potato Peel Society.  For fans of the dying letter!

London, 1941. Emmeline Lake and her best friend Bunty are trying to stay cheerful despite the Luftwaffe making life thoroughly annoying for everyone. Emmy dreams of becoming a Lady War Correspondent and when she spots a job advertisement in the newspaper she seizes her chance – but after a rather unfortunate misunderstanding, she finds herself typing letters for the formidable Henrietta Bird, the renowned agony aunt of Woman’s Friend magazine.

Mrs Bird is very clear: letters containing any form of Unpleasantness must go straight into the bin. But as Emmy reads the desperate pleas from women who may have Gone Too Far with the wrong man, or can’t bear to let their children be evacuated, she decides the only thing for it is to secretly write back . . .

What’s up next? The Feed by Nick Clark Windo

Thanks Shaz at Jera’s Jamboree for the recommendation and the copy of the book.  This is very out of my comfort zone but I’m all for giving it a go! 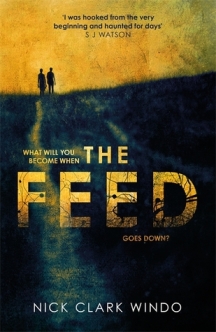 Your knowledge. Your memories. Your dreams.
If all you are is on the Feed, what will you become when the Feed goes down?

For Tom and Kate, in the six years since the world collapsed, every day has been a fight for survival. And when their daughter, Bea, goes missing, they will question whether they can even trust each other anymore.

The threat is closer than they realise…

Have you read any of my choices this week?

Do share what you’re reading and recommendations in the comments…