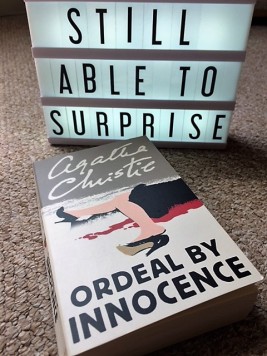 Evidence that clears the name of a boy sentenced for killing his adopted mother arrives too late to save his life – so who did kill her?

According to the courts, Jacko Argyle bludgeoned his mother to death with a poker. The sentence was life imprisonment

But when Dr Arthur Calgary turns up a year later with the proof that confirms Jacko’s innocence, he is too late – Jacko died behind bars from a bout of pneumonia.

Worse still, the doctor’s revelations re-open old wounds in the family, increasing the likelihood that the real murderer will strike again…

I’d originally seen the ITV drama adaptation but hadn’t linked it to this book so things did seem familiar as I was reading.  I did remember who’d dunnit and so was reading from a different perspective.  I was looking for the clues and red herrings that were there for the reader to have a stab at working it out – these are incredibly subtle so it’s no wonder I never pick up on them.

This is a standalone Christie and doesn’t feature either of her well known detectives so has a different feel from the usual Poirot and Marple mysteries, somewhat less formulaic.

I didn’t find it to be a fast-paced thriller but more of a slow Sunday afternoon stroll towards the deductions at the end that read like a game of Cluedo.

I didn’t find any of the characters really likeable, they’re all a bit pompous but there’s still something that made me read on.  It may well have just been my desire to work it out all out with my insider knowledge.  Still worth the read if you’ve not come across it before.

Right, so there’s my thoughts on the book, if that’s sufficient for you, great you can move on because now I’m going to have a moan about how different the tv adaptations have been.  So if you’ve not seen them, then there may be spoilers!

To my knowledge there are 2 TV versions, first done by ITV in 2007 and later by the BBC this year.

The first thing I noticed, in all 3 versions, Jacko dies in a different way: he’s hanged, dies of pneumonia and most recently he’s beaten to death.

ITV decided to make it a Marple mystery, I guess so they could incorporate it into the TV series that was showing at the time.  It doesn’t really add or take away from the story.  Although ITV did decide to have Gwenda murdered, whereas in the book it’s Philip, but the BBC decided to keep Philip as a victim but change the method of murder.

The latest offering by the BBC changed Dr Calgary’s back story so that he’s a much less credible witness and they’ve gone all out in making this a much darker, sinister adaptation with hints of police conspiracies, child abuse and then a whole completely different ending and one I thought wasn’t all cut and dried.  I’m not 100% sure who the BBC had pegged as the actual murderer.

The acting is superb in this most recent version and the way that it’s been filmed is dark and brooding.

I do wonder what the thinking is behind the reasons for changing victims and endings.  Is it that the original book wasn’t deemed mysterious or gripping enough?

Have you seen any of the adaptations or what’s your take on changing plots etc?

2 thoughts on “Book Review: Ordeal by Innocence by Agatha Christie”