Today I’m mixing 2 of my favourite things; books and baking and I’m delighted to welcome Nick Tingley to Bookboodle to share with us his recipe for Maple and Almond Cookies  which features in his novel The Bluebell Informant.  Without further ado, onto Nick to give us a little insight into his character Evelyn’s hobby!  Do read on for cookie recipes, info on the book and where to download for free!

The tiniest details are what makes a truly engaging character. This is particularly true of the main character of my debut crime novel, The Bluebell Informant – Detective Sergeant Evelyn Giles.

It took me a while to realise that Giles was a baker, but when I did it, everything else made total sense. This is a detective who is brilliant and intelligent, moral and incorruptible, and willing to go the extra mile to solve whatever case is put in front of her. So it made sense to me that she would have a hobby that she pursued with the same unshakeable determination – that hobby is baking.

Although we only see Giles baking for a few moments in the opening chapter of The Bluebell Informant (after all, she can’t take a break from fleeing across the countryside with an important witness to stop and whip up a couple of flapjacks, can she?), it is one of the few moments that I feel we see Giles at her happiest.

And it was during my research for Giles that I accidentally created a recipe for some great, chewy, maple and almond cookies (that’s right, I used book research as an excuse to make cookies)! I hope you enjoy them as much as I did “researching” them…

What you will need:

These amounts will make somewhere around three-dozen cookies, depending on how much almond you’d like in the mixture, although they are perfectly good without. 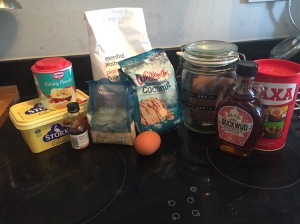 And that’s it. The whole batch should take about half an hour to make. Have a try yourself and let me know what you think. 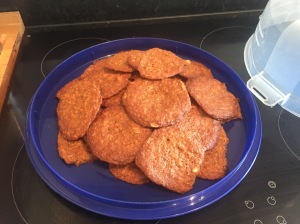 Maybe you could bake a batch and enjoy them whilst reading The Bluebell Informant – it’s free to download, so you really have nothing to lose. 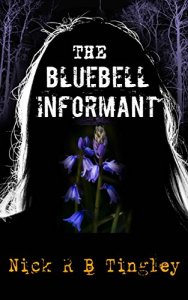 How do you catch a killer who is already dead?

One year ago, the Bluebell Killer killed his last victim. He was shot and killed, leaving behind a legacy of twenty corpses and a name that people will fear for years to come…

A year later, a man is shot in the back of the head and left in a field of bluebells.
Is it a mugging gone wrong? A copycat killer? Or is the Bluebell Killer still out there, waiting to pounce on his next victim?

For DS Evelyn Giles the solution is simple – it’s just another dirty politician caught committing an unforgiveable crime. But with the evidence stacking up against him, Giles’ suspect has one more surprise in store for her…
And his words will throw everything she knows into question…

The past is coming back to haunt DS Giles. She’s already sacrificed much for the lie. The only question is how much more will she suffer for the truth?

Thanks again to Nick for sharing his baking expertise and insight into his character Evelyn Giles.  I’ve downloaded my copy of The Bluebell Informant and look forward to trying the biscuit recipe also!

If you’re a regular reader of my Novice Baker posts then you’ll know how fussy my daughter is when it comes to bakes and cakes.  She is however a firm Gingerbread fan so I had a go at some Gingerbread Men which I baked and we decorated together!  Ahhhhh xx

For the biscuits
350g plain flour plus extra for rolling out 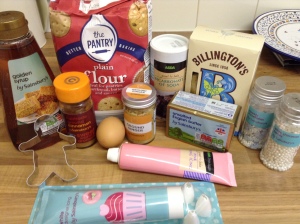 So it was week two on the Great British Bake off last week and my daughter wanted me to bake her some biscuits.  One of her favourites are Bourbon Biscuits, for those of you not familiar with these, unfortunately they’re not a whiskey flavoured biscuit but a chocolate sandwich biscuit.  I found this recipe on the Good Housekeeping website.

For the biscuit
250g/9oz plain flour, plus extra for rolling 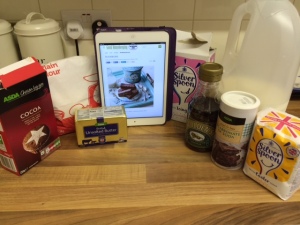 Despite the yummy chocolate filling and the perfect biscuit texture, unfortunately for me my biscuits still had that lingering burnt taste.  I hope yours turn out better. 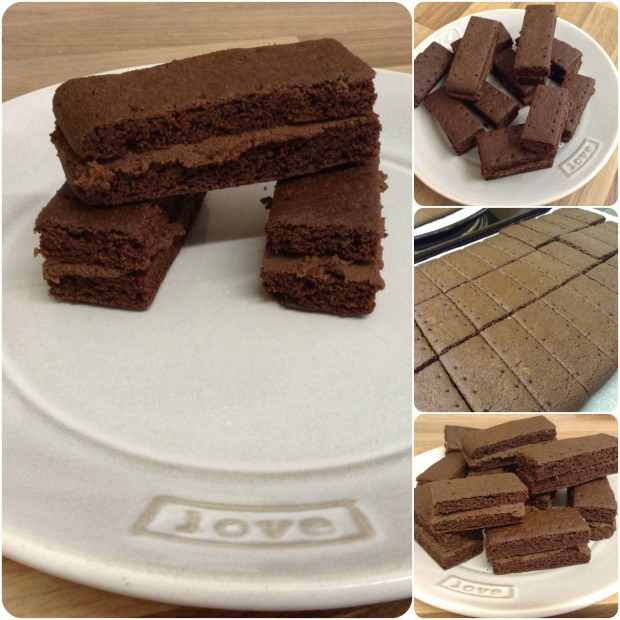 Until next time…Happy Baking!

Here’s another tried and tested recipe from the Hummingbird Home Sweet Home book.  It’s a very simple all in one recipe that gave delicious results; crusty on the outside, melt in your mouth soft and gooey on the inside. 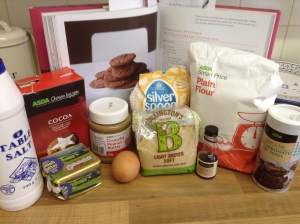 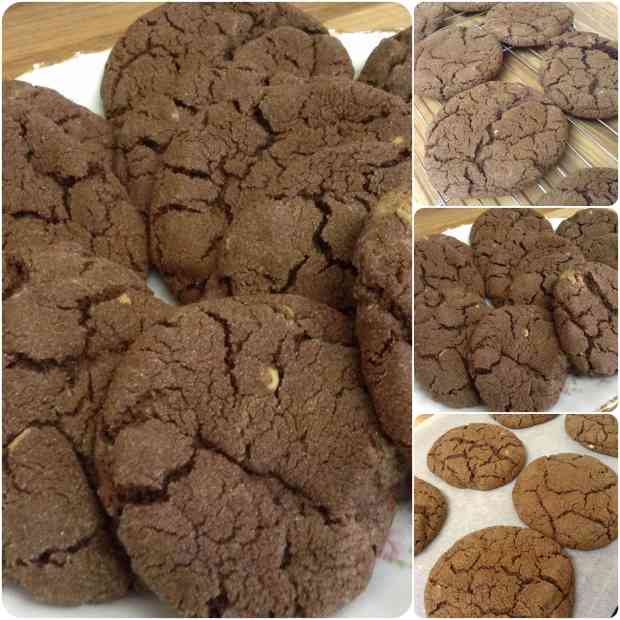 I wanted to have a go at piping and thought these biscuits looked simple enough for a beginner piper. My Viennese Fingers are not going to win any Great British Bake Off Star Baker awards, they’re all different shapes and sizes but they still tasted good.

During baking they’ve lost their definition and the recipe I had didn’t work too well for piping either.  So if you have any advice for piping beginners do let me know in the comments because I was ready to throw this mixture at the wall. 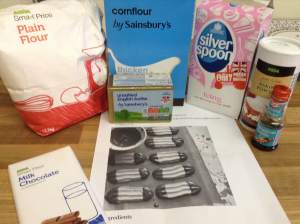 Now comes the hard bit, the bit I wrongly thought would be the fun part but actually was so stressful.  All for the sake of a biscuit!

The first nozzle I used in the first piping bag was too small,  therefore it was impossible to pipe (think bowling ball through the eye of a needle!) 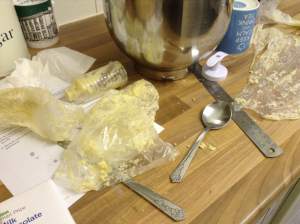 Just look at this mess!

I then had to transfer the mixture to a second bag with a larger nozzle,  but I think I overfilled the bag because the bloody thing popped!!  At this point, I chucked the mixture back in the mixing bowl and added some milk to soften it up a bit, and off I went with a third piping bag! 🙂

Despite the absolute disastrous piping experience the biscuits turned out deliciously.  I just don’t know how I do it 😉 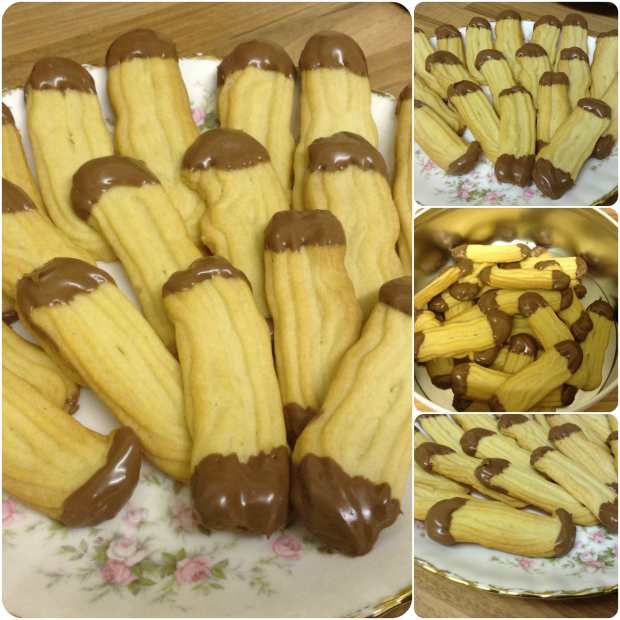 Just ignore how phallic they look!

Until next time…Happy Baking!