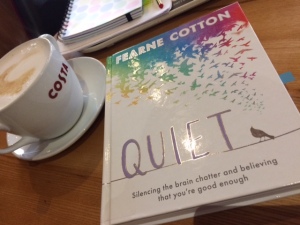 From Sunday Times bestselling author Fearne Cotton, this is the handbook for modern life we all need. Including expert advice, ideas to put into practice, adventures to complete and interviews with everyone from Bryony Gordon to Billie Piper, Quiet seeks out ways to help you tune out the negative backchat that holds you back, so you can hear the positives that will guide you forwards . . .

After having a particularly stressful week and my brain going into overdrive with constant negative thoughts (I won’t go into the why’s) I found myself going out for some well-needed fresh air and ended up in my local supermarket where I came across this book.  It was a tenner for a paperback which I thought a bit excessive so I got a copy from the library instead.

This was my first experience of a self-help book and as I took it out of the library I raised my eyebrows and rolled my eyes, really not knowing what to expect or that it would possibly help.

I liked that it was written in a very chatty way, just like Fearne was in the room having a chat with you, so it didn’t feel like being lectured. I also found it refreshing to hear that a celebrity you might think has a cushy lifestyle still has the same negative brain “Chatter”!

There are activities scattered throughout the book but I didn’t do these (it’s a library copy, remember) to help you understand where your own negativity is coming from.  I know where my current issues breed from and I didn’t feel like I needed these, perhaps a few steps too far for me but I can see their value and how they could be helpful.

I found the chapter on sleep and dreams particularly interesting as getting to sleep and making my brain switch off is something I often suffer from in times of stress or high emotion.

Overall, the book has a restful “Quiet” colour palette together with cute illustrations.  It remains to be seen if what I’ve read will stay with me going forward but here’s hoping! 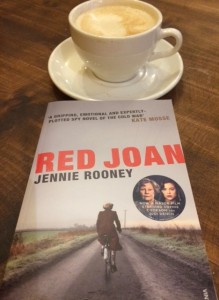 Cambridge University in 1937 is awash with ideas and idealists – to unworldly Joan it is dazzling. After a chance meeting with Russian-born Sonya and Leo, Joan is swept up in the glamour and energy of the duo, and finds herself growing closer and closer to them both. But allegiance is a slippery thing.

Out of university and working in a government ministry with access to top-secret information, Joan finds her loyalty tested as she is faced with the most difficult question of all: what price would you pay to remain true to yourself?

I was very grateful to receive a batch of Red Joan to distribute at my book club and overall it was received well and enjoyed.

From the outset Joan comes across as highly intelligent but very naive which allows for the course of events that ensues.  She does seem to think that she’s doing the right thing but never quite sees the bigger picture or quite how much she is being manipulated.  As a reader, this had my emotions switching between frustration at how she was swept along with it all and sympathy for her wanting to fit in and being taken advantage of.

I like books that have a dual timeline and this one was no different.  It flips back and forth between the actual events and the interrogation in the present day.  The book is based on a true story and the fact and fiction are effortlessly weaved together so there are no seams.

Since reading the book I have seen the movie starring Dame Judi Dench. Whilst it was an enjoyable and good adaptation with many parts true to the novel, the book was far better.  So much detail was omitted from the film, in particular regarding Joan’s relationship with her son and why.

This is such an interesting story so do read if you enjoy historical fiction, or a different kind of spy novel, particularly those with their roots based on fact.

Just days after Raynor learns that Moth, her husband of 32 years, is terminally ill, their home is taken away and they lose their livelihood. With nothing left and little time, they make the brave and impulsive decision to walk the 630 miles of the sea-swept South West Coast Path, from Somerset to Dorset, via Devon and Cornwall.

Carrying only the essentials for survival on their backs, they live wild in the ancient, weathered landscape of cliffs, sea and sky. Yet through every step, every encounter and every test along the way, their walk becomes a remarkable journey.

This book had been recommended to me by several people, all saying how wonderfully inspiring and emotional it is, so I finally got round to reading it before Christmas.

I found the book to be exceptionally honest and I couldn’t help but warm and want to befriend Raynor and Moth during a particularly difficult and challenging time.

There was one thing that did perplex me and that was their desire to make the walk in the first place. I totally understood their financial and housing situation and how completely devastating and demoralising that would be, but why would a 600+ mile walk seem like your only choice.

I’ve visited Cornwall many, many times over the years and very much enjoyed the description of the scenery.  This contrasted with the interesting perspective of the couple, not being residents or tourists in the villages and towns they passed through and the, mostly, hostile reception they received.  I therefore applaud the their dedication, determination and sheer bloody-mindedness to start this walk and make it as far as they did.  It’s amazing what you can achieve with nothing!  Also loved the presentation of the book and the cover illustration.

A book I wholeheartedly recommend as an inspirational read for the start to 2020! 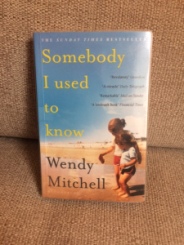 When she was diagnosed with dementia at the age of fifty-eight, Wendy Mitchell was confronted with the most profound questions about life and identity. All at once, she had to say goodbye to the woman she used to be. Her demanding career in the NHS, her ability to drive, cook and run – the various shades of her independence – were suddenly gone.

This was our most recent book club pick and overall it was received by the group quite well.  None of us thought the topic an easy read but we all agreed it was one that everyone should try and read.

It wasn’t really a book I looked forward to reading and often throughout my mind kept straying to how a woman with early onset dementia could have written a book.  As you read you discover what a resourceful woman Wendy Mitchell is.  This is going to sound awful but as much as I applauded her bravery for speaking out in this way I just couldn’t take to her.  I sympathised and empathasised with her but did find her to be somewhat annoying in equal measure.  She just came across as a bit Mary Poppins – practically perfect in every way.  That said, this is an important resource for all generations to discover! 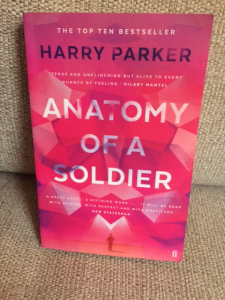 Captain Tom Barnes is leading British troops in a war zone. Two boys are growing up there, sharing a prized bicycle and flying kites, before finding themselves separated once the soldiers appear in their countryside. On all sides of this conflict, people are about to be caught up in the violence, from the man who trains one boy to fight the infidel invaders to Barnes’s family waiting for him to return home.

We see them not as they see themselves, but as all the objects surrounding them do: shoes and boots, a helmet, a trove of dollars, a drone, that bike, weaponry, a bag of fertilizer, a medal, a beer glass, a snowflake, dog tags, an exploding IED and the medical implements that are subsequently employed.

Every so often a book crops up on your radar that you really makes you think and puts everything else in to perspective for you and after a run of ok meh reads this one really made me sit up and take notice and realise that, actually, my life isn’t so bad.

The book acknowledges that it is loosely based on a true story but you only have to watch your local news, or read a paper, etc to realise that this book could have been written about a number of wounded-in-action servicemen and women and therefore every chapter, every page rings true.

Each chapter is told from the perspective of various inanimate objects and on the whole it’s a very impressive way of telling the story.  I can’t remember the last time a book made me feel as emotional as this: tearful, sympathy, anger to name a few.  It even made me feel sad when a piece of bandage was thrown in the bin!

There’s a lot of this book that isn’t easy to read; there are scenes of an IED explosion,  amputation and bomb preparation so will not be to everyone’s taste.  Some lines will really take your breath away.

“I had changed the body’s proportions forever.  It no longer filled the space it should.”

This line really choked me up – I could clearly visualise the scene! 😦

I just had one small issue with the way the book was written and that was that the objects would often comment on the feelings of the people around them.  Whilst I was totally on board with how everything was else was described,  an object describing a scene around it and recounting stories told etc, it couldn’t possibly comment on a person’s feelings (I know how daft this sounds given the way the whole book is told!) but there we have it, deduct one star AND it really wasn’t needed, there was so much raw emotion in all the other lines.  Overall, an impressive read.