I’m delighted to welcome R.S Pateman to the blog today, author of The Second Life of Amy Archer and new novel The Prophecy of Bees. (click book title to go to review)

Let’s chat about the books….

Both novels are told from a female perspective, where does your insight/inspiration come from?

With The Second Life of Amy Archer there was never any doubt that the narrator would be female – it just took me a while to work out which of the main female characters would narrate. I had such trouble nailing The Prophecy of Bees that I drafted three entirely different novels – all had the same premise but the plot and characters differed in each one. The first one had three people narrating it, the second was a double hander and in the third and final version I just had Izzy, a sixteen year old girl.

I do find it quite natural to write female characters. Perhaps it stems from my upbringing. My parents ran a local authority children’s home and we lived in the home. When I was eleven it became a home for teenaged girls only and we lived in a house built onto the home, with a door connecting us to it. All the residents were female as were all but one of the members of staff. Maybe being around them gave me some insight into their trials and tribulations.

Is Stagcote Manor, the setting in The Prophecy of Bees, based on a real house and did you make any location visits?

I was lucky enough to be invited to stay at a friend’s house in the Cotswolds so I could write Amy Archer. He lived in the Gate House of what had once been a large country estate. The manor house still exists but wasn’t really the blueprint for Stagcote Manor – it’s far more attractive than Stagcote! But it got me thinking about the break up of country estates – and that seed developed into The Prophecy of Bees. 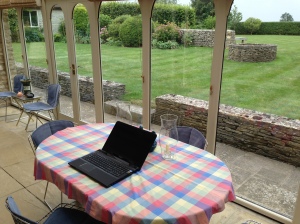 So, I didn’t so much as visit the location as live in it! But I did explore other places in the area, especially the churches, one of which had a stunning collection of kneelers embroidered by locals and the other had a window with an optical illusion that showed a man’s face on one side and the Virgin Mary’s on the other. Both of these delicious discoveries made it into the book.

The idea developed as I started to look into the area’s folklore, which included legends of phantoms, stone circles and witches. The usual suspects. But it was when I started digging into superstitions that I saw there was fun to be had with them.

A lot of superstitions are based around domestic life – cutlery, washing, baking and so on – and as I write fiction about psychological dilemmas in domestic settings, they made a perfect toy box for me.

There’s a quote that states “most of us aren’t superstitious, but a lot of us are a littlestitious.”

I practically throw myself in the path of a black cat on National Lottery draw days and can’t help but hesitate when it comes to walking under ladders. It’s daft but I do think about it – and the fact that the superstitions and possible outcomes even enter my mind gives them a kind of power and offers some scope for a novel.

I loved the ending; I didn’t see it coming and was really shocked. When you started writing, did you know that’s how it would end?

No! Although I’d written three different versions of the novel they all had different endings. Opinion was split on the ambivalent ending of Amy Archer so I wanted to have a more definite resolution this time. But I still wanted a twist too. It does seem to have surprised a lot of people (including you!) which is very satisfying.

Many thanks to Rob for answering my questions. He’s very kindly offered 3 copies of The Prophecy of Bees to my readers so do click the link below to enter the giveaway! It’s a great read 🙂

Connect with the author, R.S Pateman