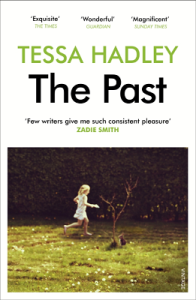 Three sisters and a brother meet up in their grandparents’ old house for three long, hot summer weeks. The house is full of memories of their childhood and their past — their mother took them there when she left their father – but now they may have to sell it. And under the idyllic surface, there are tensions.

Roland has come with his new wife and his sisters don’t like her. Kasim, the twenty-year-old son of Alice’s ex-boyfriend, makes plans to seduce Molly, Roland’s teenage daughter. Fran’s children uncover an ugly secret in a ruined cottage in the woods. Passion erupts where it’s least expected, blasting the quiet self-possession of Harriet, the oldest sister. A way of life – bourgeois, literate, ritualised – winds down to its inevitable end.

Just lately I’ve had a run of not enjoying my book club reads and unfortunately this one wasn’t for me either.

The first thing I noticed and didn’t really like or understand why it was written like this, is the dialogue and conversations.  For some reason the author has written it like this example:

When you decided to invite Kasim, Fran said, – where exactly were you planning for him to sleep? Alice was blithe. – Don’t worry, there’s plenty of room.  She banged through the drawers in vain, looked hopelessly around here. – Don’t we have scissors?

I don’t get it, why use these lines to indicate speech rather than speech marks?

I also found it quite unbelievable that Alice would have taken her ex-partner’s teenage son to her family home for a 3 week holiday.  It’s not as if they were close, just all very random.

If this book were a film, it would be one those that’s labelled ‘critcially acclaimed’, but most of us will be bored to death. Just because a book is well written and full of long fancy words that I’ve never heard of before doesn’t make it interesting.

There were so many characters and plotlines that the story only scratches the surface of them.  If you’re going to write a book like this and concentrate on the intimacy of people’s everyday lives it still needs something to pull it along and make you want to pick it up, unfortunately I thought it was boring and easily forgettable.  If you want to read a really good character based book, read Plainsong by Kent Haruf.  Shame really, this book had ok plots,  I just thought it was trying to do too many things.

p.s  I didn’t want to include this in the main body of the review as I appreciate this is a publisher and editing issue rather than the author but there were a few mistakes in this book.  One I could forgive but not several.  I mean Pliar instead of Pilar (a significant character).  Using though instead of thought, and this sentence “she does looks like you”.

6 thoughts on “Book Review: The Past by Tessa Hadley”